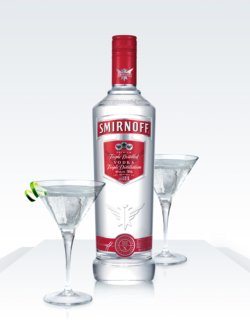 In the history of vodka, it accounts for 20% of all the spirits in America. It is by far the most popular liquor for making cocktails because it is known for its lack of aroma, taste, colour, and character. It is an un-aged spirit commonly thought to be made from potatoes, vodka is more often made from grains such as wheat, barley, and even rye. Although predominately corn is used.

Vodka did not become well known in North America until after WWI, nonetheless, it dates back more than a thousand years into Russian and Eastern Europe – known as the vodka belt*.

The soldiers brought vodka back to America in the 30s and its popularity exploded. Vodka plays a significant role in the vodka belt’s history. It was often drunk at religious festival, and served with bread at the beginning of formal dinners. The word “vodka” means in both Russian and Polish (voda / wood), “water”.

Producing vodka was primitive in its early stages, the distillation process was generally repeated 3 times and produced a 70-80% alcoholic volume. It was then watered down to a lower alcoholic volume content. Sometimes diluted with milk or eggs after the first distillation process and then water added after the last distillation. The main filtering method was done through charcoal and this method is still used today. It was made in pots and was sometimes flavoured and used as medicine.

Vodka made with rye and wheat are consider of the highest quality. It was the rising demands of vodka that lead to it being made with potatoes, which is consider of the poorest quality. What makes vodka taste, smell and look so different from whiskey is that it is distilled down to almost pure alcohol content before it is cut with water.