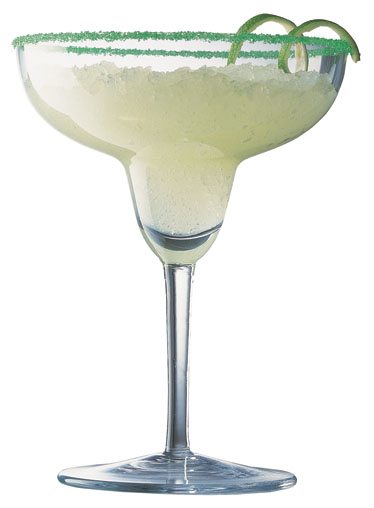 The History of the Frozen Margarita

Learn the simple step-by-step process to make a margarita. Watch the video below and then learn about the history and the many plausible origins.

There are many stories about who invented the margarita and why. The following are perhaps the most commonly repeated tales of the creator of the margarita cocktail:

Barman “Willie” from Mexico City, 1934
In the employ of the Melguizo Family – Marguerite Hemery lived in the Rio Grande Valley since the 1930s and went to a restaurant in Matamoros called Los Dos Republicas. She was friends with the owner and, as the story goes, his bartender composed a special drink for her.

Danny Negrete, 1936
Ratios: 1:1:1 (33% tequila, 33% Triple Sec, 33% fresh lime juice).According to Salvador Negrete, the son of Daniel Negrete, the family story goes that Daniel opened a bar at the Garci Crispo hotel with his brother, David. The day before David’s marriage, Daniel presented the margarita as a wedding present to Margarita, his sister-in-law.It was a combination of one-third Triple Sec, one-third tequila and one-third squeezed Mexican lime juice. The drink was not blended and was served with hand-crushed ice.

Danny Herrera, 1938
In Ensenada, Mexico, Danny Herrera, a renowned Mexican bartender who worked at the Riviera del Pacifico Hotel and Casino was completely in love with Marjorie King, an American actress who hated taking tequila pure. Tequila was also the only liquor that her body could tolerate. Thus, with the intention of wooing her, Herrera used his ingenuity to bring together flavors to meet Marjorie’s tastes, until he finally found one of the world’s most famous drinks.

October, 1941 by bartender Don Carlos Orozco
He concocted the perfect mixture of equal parts tequila, Damiana (Cointreau is used now) and lime, served over ice in a salt-rimmed glass for Margarita Henkel, daughter of the German Ambassador to Mexico at Hussong’s Cantina.

Enrique Bastate Gutierrez, early 1940s
Gutierrez, who lived in Tijuana, Mexico, boasted to have created the Margarita as a homage to actress Rita Hayworth, whose real name was Margarita Cansino.Other versions of the story claim the Margarita was indeed named after the actress, but in the 1930s, before she adopted her screen name. As a teenager, Margarita Cansino worked as a dancer at the Foreign Club, in Tijuana, where she supposedly inspired a bartender.

Francisco “Pancho” Morales, 4 July 1942
A bartender, Pancho Morales invented the margarita on July 4, 1942, at a Ciudad Juárez bar named Tommy’s Place. Supposedly, a woman requested a Magnolia (brandy, Cointreau, and an egg yolk topped with Champagne). Morales was a little fuzzy on the recipe; he improvised and his ersatz creation was a big hit.

Santos Cruz, 1948
According to the promotional flyer for the legendary Balinese Room in Galveston, Texas, head bartender Santos Cruz created the Margarita for singer Peggy (Margaret) Lee in 1948. The Balinese Room was opened in 1941 and was Texas’s finest nightclub with A/C, casino gambling, superb food and drinks, and stellar entertainment until the Texas Rangers finally shut it down in 1957.

Ratios: 2:1:1 = 4:2:2 (50% tequila, 25% Cointreau, 25% fresh lime juice). Sames, who created the drink at her Acapulco bar, gave the reason of being “close with a lot of famous hotel and restaurant people” in introducing the margarita. Sames used one part Cointreau, two parts tequila and one part lime juice for her margarita. Knowing that most people drank tequila preceded by a lick of salt, she chose to garnish her cocktail with a rim of coarse salt. Sames moved to El Paso, TX in 1958 where she was well known for her lavish parties. 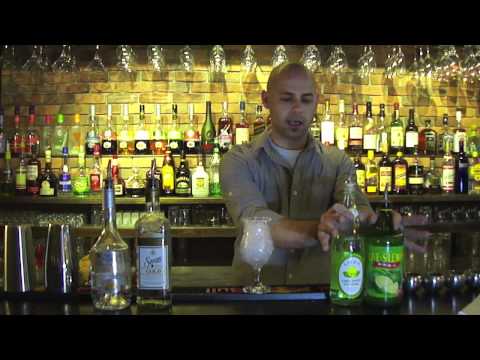 Hi there, Reese Richards from BarsandBartending.com and today we’re going to make a margarita. So you need a cocktail glass and i have already pre-rimmed the glass with salt. Okay, we’re just gonna add our crushed ice. Then you need tequila, triple sec and lime bar mix – if you don’t have lime bar mix, you can use lime cordial which is the sweet part of the sweet and sour, and the sour is the lemon juice. So we’re gonna those two. First we need an ounce of tequila, half ounce of triple sec and we’re gonna top it off with our two juices. Okay, then we put lime garnish and straw. There you have it, margarita.