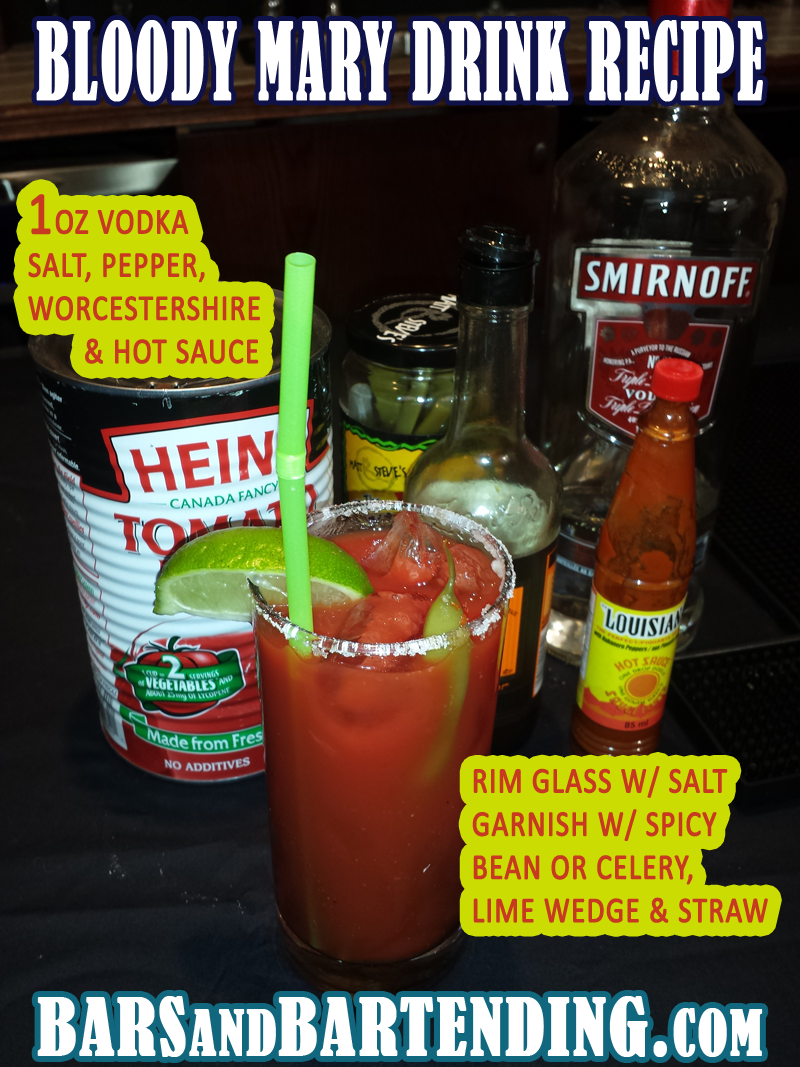 The bloody mary drink, whose exact origins are disputed, has a long and colorful past. Some say it was invented in Paris in the 1920s while others proclaim that the bloody mary cocktail was indeed invented in America in the 1930s.

And the name itself – did Bloody Mary refer to Mary Pickford, the actress, a Chicago waitress named Mary or Queen Mary I of England?

Whoever invented today’s version of the bloody mary drink recipe gets our congrats (although I’d prefer a Caesar). The bloody mary drink has earned a bit of a reputation as a good hangover cure – due primarily to the antioxidant properties of tomatoes.

The bloody mary is a great cocktail to have during Sunday brunch – it’s not going to make you gag like whatever you were drinking the night before and it may just help with that Saturday night hangover.

Bloody Mary recipe variations – as with most cocktail recipes, there are many variations on the bloody mary drink ingredients.

The basic version is what you see in this bloody mary tutorial. Some variations in garnish are: dill pickle, olives, carrot stick,pickled asparagus spear,spicy bean

Hey there, Reese Richards from barsandbartending.com. All right, today we’re going to do a Bloody Mary cocktail. A Bloody Mary. So, first we have our Collins glass. Any kind of cocktail glass will do. We’re going to rim the glass. So, to do that, I just have a little lime…. I’m going to wet the edge here with the lime, and then, uh, we’re using regular salt. Ok? Just the regular salt. Add your ice. Ok? And, uh, straight vodka…one ounce. And then we’re going to spice her up. A couple of dashes of Louisiana Hot Sauce, or Tabasco sauce. Some salt and pepper. Classy, eh? With the grinder? And some Worcestershire, and, uh, Heinz tomato juice. Ok? And we’re going to give that a little lime. Lime, for our garnish. Our straw, and a nice little Extreme Bean spicy little bean. And there you go, your Bloody Mary.