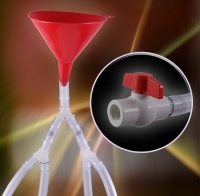 The first question we need to answer is what is a beer bong? Sometimes written beerbong, it’s a funnel device with a tube that allows someone to chug a large amount of beer in a short amount of time.

Not to be confused with the game Beer Pong, which involves a combination of drinking beer and ping pong (minus the paddles and with some very different rules.) 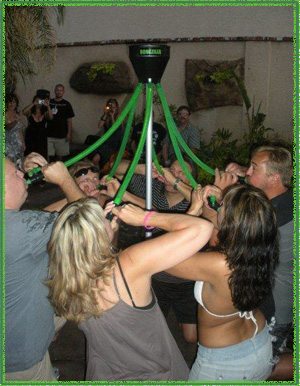 Whatever the shape or size of a beer bong, they all have one thing in common – they are all basically just a tube (or tubes) connected to a type of chamber which holds the beer.

The idea is to pour whatever amount of beer either a) fits in the holder at the top or b) is the amount you can handle chugging. The bong-er (the person drinking) will have to plug the end of the tube with their thumb until all the beer has been poured in or close the valve if the tube has one.

This beer bong is probably one of the closest we come to a “regular” bong – and even then, it’s still not really all that regular. It’s florescent and will glow under black lighting. These are perfect for running contests at the club or taking them with you to your next beach party or BBQ (it works just as well whether its glowing or not 😉