What are Bar Towels?

Sometimes called a bar mop, or bar mop towel, it’s a square of towelling cloth (natural or synthetic) that is a bigger than a dishcloth but usually not as big as a dishtowel. They are super absorbent, generally more so than standard kitchen cloths, are thicker and heavier and can take way more abuse than their kitchen counterparts. For simplicities sake, you can consider bar mop towels as super heavy duty kitchen rags. They are frequently white, though they can come in other colours and bear some detailing or even the logo of a bar or restaurant. 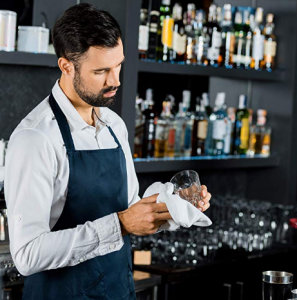 Aside from simply being used to wipe down the surface of the bar, bar towels actually have a variety of uses, including:

The History of the Bar Towel

As its own entity, the bar towel doesn’t have much of a history to speak of. As part of a greater invention (the towel), however, it has a much more interesting story.

The creation of the towel is linked to the city of Bursa, Turkey, in the 17th century. While it is not certain who first invented them, we do know that Turkish towels began life as a piece of flat woven linen or cotton that was often beautified with embroidery. They were long enough to wrap around the body, but kind of narrow for their purpose. Called “pestamel”, they were used in Turkish baths and were extremely absorbent and stayed lightweight even when wet.

As the Ottoman Empire grew, weavers began to be asked to add more complicated designs. By the time the 18th century rolled around, the very familiar cotton loop began to show up in the material. Because towels were handmade, they didn’t become affordable until well into the 19th century, with the advent of industrialization. With the rising use of machinery in production, cotton terrycloth began to be sold by the yard as well as in the form of pre-made towels.

These days, towels are available in a number of different sizes, materials, and designs, with modern bars having their own type: the bar towel. 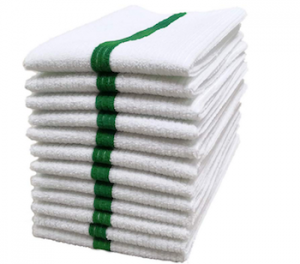 Made of 100% Microfiber, these bar towels are both incredibly soft and highly absorbent. Microfiber can hold up to 8 times its weight in liquid, and yet it dries twice as fast as cotton terrycloth or other natural fibers. With a simple white and green stripe design, these will fit in anywhere. They can be used wet or dry and will leave clean and streak-free shine on any surface. 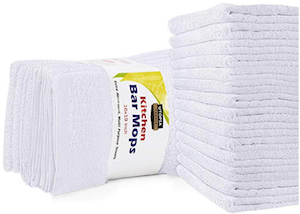 Crafted of a more traditional material, Utopia bar mops are 100% ring-spun cotton. This set has 12 white 16X19” bar towels. The material type means that these bar towels are extra soft, making them far more pleasant on the hands. The highly absorbent nature of the material allows them to be both hardworking and lightweight. At just over $1 per towel, the price won’t break the bank for even the most frugal bartenders.

Made of 100% cotton, the Talvania Bar Mop is natural and can hold up to 4 times more liquid than paper towel, making your cleaning dollars go farther. Their durable, tight weave means they will not only take a beating and will last through thousands of jobs, but they are easily machine washable and extremely cost effective. 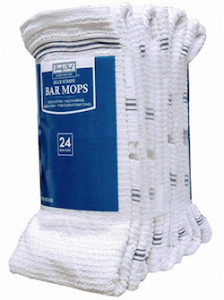 These large, 100% ring spun cotton bar towels are made from completely natural materials and are thus free of harsh chemicals and synthetic materials. They are super soft, making them easy on the hands, as well as super absorbent. With 12 hardworking bar towels in a pack, you get a lot of bang for your cleaning buck.

Made of incredibly soft 100% ring spun cotton, this pack includes 12 large towels with hemmed edges to prevent the weave from unravelling. These bar towels dry fast, preventing mildew and bacteria. They are easily machine-washable and offer a streak-free and lint-free clean.