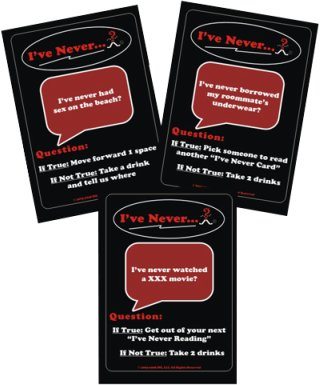 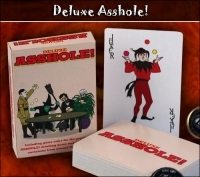 If you’ve been to high school then chances are good that you’ve played the card game Asshole before. Well, this is the adult version of that game. And if you’ve ever played the game in two different cities or with different sets of friends, you may also know that the rules tend to change a bit here and there. No worries though because this card drinking game comes with a complete set of instructions as well as rules for 10 other fun drinking games.

Drinking with the King Card Game

With this game, you don’t have to worry about spills as the cards are all 100% waterproof. Also you won’t need to remember what actions are to be performed for each card or which “house rules” you will be using. A very entertaining game that requires skill, imagination and an ability to handle your alcohol.

If you’ve never played the game I’ve Never (I Have Never) before, you’re in for a wild time. Each card has something written on it and as each person reads the card, the people who the statement is untrue for have to take a drink. For example, the card might say “I’ve never had sex in public before”. If the person reading the card HAS had sex in public before, they must take a drink – and so must everyone else who is playing who have also had sex in public. This game is a great way to find out more about your friend or partner. You never really know for sure who has never… 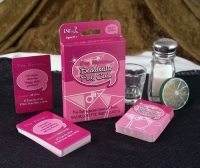 This is a card drinking game based on the I’ve Never game above but this one’s designed specifically for bachelorettes. This game can be played in any bar or nightclub and is the perfect add-on to your girl’s night out festivities. Whether your bachelorette party is to take place at someone’s home or out at the club, bring along this drinking game and make it a night she won’t soon forget (…or will she even remember?)

The instructions are fairly simple – the Bride to Be draws a card and decides who’s going to be playing that round – all the girls, the maid of honor, the entire bridal party or just herself. Then she reads the question out loud and the fun begins. It’s a wicked way to find out all the dirty little secrets everyone has.

Each game contains 110 cards and comes with a complete set of rules. 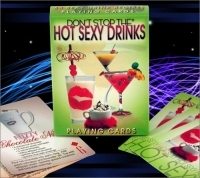 If you didn’t find a specific drinking game you’re looking for, be sure to check out all the other drinking games we have in our bar store.

And if you’re still left unsatisfied after browsing through all the games you can drink to in our bar store, check out our other page on drinking games where you’ll be able to play using just playing cards, dice, some glasses or other household items.

Important: As with any drinking game or night out, please drink responsibly and do not go past your limits. Some people can handle a LOT more drinks than others. You know your own limits. Puking in and of itself is not fun, let alone getting alcohol poisoning or not remembering what happened the night before.